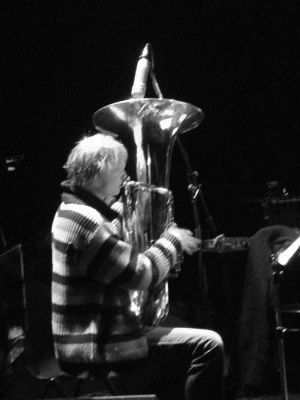 Artists information:
Martin Taxt (tuba)
Martin Taxt (b.1981) was born and grew up in Melhus in the middle of Norway. After discovering the tuba through the local school's marching-band he attended Heimdal VideregŒende Skole (high school) where he studied with the famous classical tuba player ¯ystein Baadsvik. After a few years focusing on classical music, Martin began to pay more attention to jazz and improvised music. In 2001 he formed his octet Big Spirit People with guitarist Eirik Blekesaune, and the duo Silucian Town with Lena Nymark.
From 2002 to 2006 he studied in Oslo, at the Norwegian State Academy of Music, and Conservatoire Nationale Superieur de Musique et de Danse de Paris, with among others Michel Godard, Riccardo del Fra, Torbj¿rn Kvist, Ivar Grydeland and Bj¿rn Kruse
Both improvising and composing are important elements of Martin's project. He's influenced by a wide specter of music. From different kinds of popular music (The Beatles, Tom Waits, Autechre, Afrirampo) through traditional music (Johnny Cash, Hilmar Alexandersen, Japanese gagaku, Pygmee music) to classical (Gesualdo, J.S. Bach, J.Haydn) and contemporary music (H.Lachenmann, S.Sciarrino, M.Feldman, G. Scelsi).
Martin has contributed to several recordings during the last few years, including Hanne Hukkelberg, Little Things (Propeller Recordings/Leaf Label); Odd Nordstoga, Heim te Mor (Universal); Acoustic Accident, Q.S (AIM Records); Spin Ensemble (SPIN01) and with his own group Florebius, House of Flour (Jazzaway Records)
After studying with guitarist Ivar Grydeland 2005/2006, Martin re-discovered his interest for sound-oriented improvisation, more influenced by contemporary music and different kinds of traditional music than jazz.
In September 2006 he performed with the great japanese impro musicians Toshimaru Nakamura and Tetuzi Akiyama at GRID605 in Tokyo. Later he invited the same Akiyama to Norway to do two concerts in collaboration with the unique impro-duo Streifenjunko. The latest news is that he will join trumpeter Dave Douglas' group for a project in June 2007, and also he has become a member of the French group Circum with among others Vincent Mascart, Beniat Achiary and Carlo Rizzo.

Kim Myhr (guitar)
myspace
Kim Myhr (born. 17. december 1981 in Oslo) is a musician and composer in the field of contemporary and improvised music. He studied guitar and composition at Berklee College of Music in Boston (2003-2005) and has since then been based in Europe. Myhr is interested in sound poetry, where it is the sound itself, its texture and nuance of timbre that is the core of his expression, rather than traditional musical parameters such as functional harmony and melody, although they can appear too, but then only hidden, like shades.
The consideration of nothing is also important in his music: to take no existing element for granted and to build music slowly from nothing and with simple buildingblocks. In other words, Myhr sees the importance of questioning the very foundation of his thinking about music. Deconstructing it, then constructing. Why is there music, and not nothing?
He believes in an untheatrical performance act: by leaving the sound in focus rather than the player, he invites the audience to "look at" the sounds from different sides, and he gives time and space for the listener to reflect on what they are hearing. His soft sounds often seem to be on the verge of disappearance, existing in a transient moment between something and nothing, abscence and presence.
His first release as a composer/performer was "Bordello music" released on AIM records in 2004. Myhr wrote all the music, and the cd recieved wide critical acclaim from the norwegian press. His recent projects are the Silencers (with Benoit Delbecq, Toma Gouband and Nils Ostendorf), Hibiki (with Laurent Bruttin and Dragos Tara), Murmur (with Klaus Holm and Martin Taxt), a duo project with australian reedplayer Jim Denley and the Scarlatti Ensemble (playing italian baroque music).
He has embarked on an international career as an improviser with performances all across Europe, Canada, US and Australia.

Tetuzi Akiyama (guitar)
Born in Tokyo, April 13, 1964.
Tetuzi Akiyama is a highly unique and experimental guitarist heavily applying free improvisation and noise. Besides guitar, he also plays electronics, viola, and self-made instruments.
Akiyama became an enthusiastic hard rock fan when he was eleven years old, and started playing electric guitar at the age of thirteen. Later, he also came to be very interested in free improvisation and classical music. He formed the improvised music band Madhar in 1987. He also started playing classical viola, and formed the Hikyo String Quintet in 1994. The band, which played avant-garde improvised classical music, consisted of a viola, two cello, and two violin players, and included Taku Sugimoto on cello. Sugimoto soon left the band, which thus became a quartet. Later that year, Akiyama and Sugimoto launched their guitar duo, Akiyama-Sugimoto. They played gigs in New York in 1995, and in the Midwest (including Chicago and Detroit) in '96. For about a year starting in early 1994, Akiyama was also a member of Nijiumu, one of guitarist Keiji Haino's bands.
Recently Akiyama has two improvised music projects: Sutekina Tea Time, a duo with Takashi Matsuoka (guitar, vocal); and Mongoose, a trio with Sugimoto and Utah Kawasaki (analog synthesizer). Since 1998, together with Sugimoto and Toshimaru Nakamura (no-imput mixing board), he has been organizing an inspiring monthly concert series, The Improvisation Meeting at Bar Aoyama (renamed The Experimental Meeting in '99, and Meeting at Off Site in 2000).