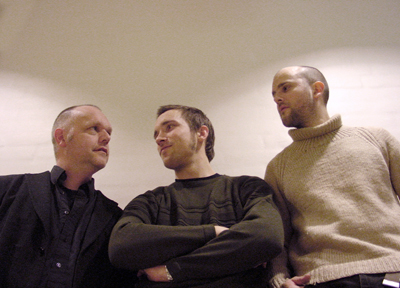 A Swedish-Norwegian trio featuring ”total-polytonal-rhythmic-music.” In other words: advanced modern jazz at its best...
The Sten Sandell Trio was formed in the spring of 1999 and has since worked regularly in Stockholm and Oslo. The trio is firmly in the tradition of European improvised music, and no other piano trio in Scandinavia plays music of such intensity and expression.
During several concerts at the Vancouver Jazz Festival in 2001, the trio debuted their CD Standing Wave (SOFA 504) which included music recorded at Club Blå and the Munch Museum in Oslo.

The press wrote:
“The biggest revelation of the festival was Sandells own trio, finding the pianist's menacing motifs hovering above Johan Berthling`s churning bass and the restless barrage of percussionist Paal Nilssen-Love, offering a startling contrast to the glorious weather outside” - Jon Morgan, The Wire.

“This is high-energy music that strikes deep rather than loud…Easily one of the best releases of this year” - Steven H. Koenig, Jazz Weekly

“It has a long time since I heard a jazz recording wherein the light is turned on as fast as on Standing Wave." - Arild R. Andersen, Aftenposten Aften

Sandell has collaborated with Evan Parker, Gush, Mats Gustafsson, Michael Zerang, Fred Lonberg Holm and many other top improvisers. He has played at many of the major jazz/improv-oriented festivals in Europe and North America. His style has been compared to Cecil Taylor’s, but he has also been strongly influenced by contemporary music and composers such as Morton Feldman and John Cage. Sandell has been playing improvised music for almost 30 years.
MySpace

In spite of his youth, Berthling has become one of the premier bassists in Stockholm’s improvised music scene, working with Raymond Strid, Fredrik Ljungkvist, David Stackenås, etc. Influenced by William Parker, Berthling is a high-energy bassist and musician of many dimensions. In addition to bass, Berthling is adept at guitar and electronics, and leads the internationally acclaimed electroacoustic trio Tape.
MySpace

Nilssen-Love is one of Europe’s most in-demand drummers. His high-energy pyrotechnical drumming has been heard with Atomic, Frode Gjerstad Trio, Element, the Peter Brötzmann Tentet, Scorch Trio, The Thing, School Days, Atomic, and many other groups.
Wikipedia