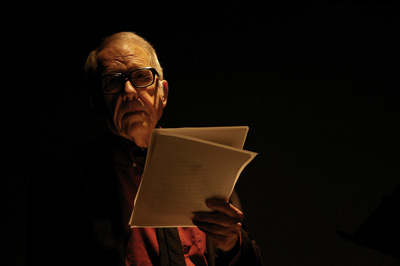 This “forgotten masterpiece,” made a quarter-century ago and never received, remains a searing cinematic experience. It is a film about transgression and retribution, about nature revenging itself upon destructive modern man. At the same time, it is not about a lumberjack and his relationship with “nature,” something more and more personified until made palpable at the horrific conclusion. Though it won a prize at the Locarno Festival, and made several foreign critics best-ten lists, the film was far too outspoken for bubble-era Japan. Though made by an enormously talented young director, written by one of Japan’s major younger writers, and scored by Japan’s finest composer, it offended local critics and failed to make money. This rare showing (VHS) is possible through permission of the director and Kino, the purveyor of this tape.

Named by TIME magazine, "the dean of Japan's art critics," and acknowledged as the foremost authority on Japanese cinema, Donald Richie has also written widely - some forty books in all - on other aspects of the country and its people. The Inland Sea has been called a classic and its film version has won prizes at international film festivals as well as the National Geographic Earth Award. His Public People, Private People has been called "unforgettable" by Tom Wolfe and of his two collections of essays, A Lateral View and Partial Views, Susan Sontag has said: "Donald Richie writes about Japan with an unrivaled range, acuity, and wit."

Richie has lived in Japan for most of his life. Arriving on New Year's Day, 1947, he worked as feature-writer and film critic for The Pacific Stars and Stripes. After graduating from Columbia University in 1953, he returned to Japan as film citic for The Japan Times. He has written for Newsweek, The Nation, Variety, The New York Times, The Guardian, Harper's, Atlantic Monthly, and all major films magazines. In addition he presented the first retrospective of the Japanese film director Yasujiro Ozu at the 1962 Berlin Film Festival and has since acted as guest director of the Telluride Film Festival, and served on the juries at the Hawaii, Lacarno, Thessaloniki, and Kerala Festivals.
In addition to writing a column for The Japan Times, lecturing around the world, and continuing to lend his distinctive voice to Japanese studies, Donald Richie teaches film at Temple Universityfs Japan Campus.

Institute of Contemporary Japanese Studies-ICJS
The ICJS is an organization dedicated to fostering study and research on various topics related to contemporary Japan. The Institute hosts lectures, seminars, and symposia that provide a forum for Japanese studies scholars to present their work on issues related to contemporary Japanese social, cultural, and political issues. The ICJS reflects TUJ's commitment to offering research and study programs linking Japan and other countries, fostering greater overseas understanding of Japan, and serving an innovative role in International Education in Japan.