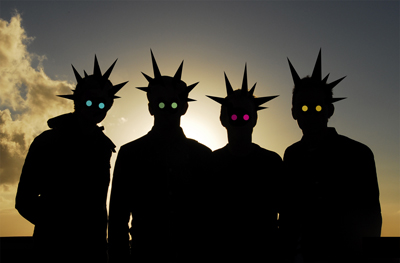 Live: REGURGITATOR (from Australia), BO-PEEP (opening act)
Advance ticket is available at Lawson Ticket (L-code: 72087), and you can also book from HERE!!

About REGURGITATOR
Formed in March 1994... Ben Ely, Quan Yeomans & Martin Lee started a side project to the bands they had going at the time – Pangaea, Zooerastia, Brazilia respectively. Regurgitator was an appropriate moniker to describe the assembled mass of styles, sounds & attitudes, fueled as much by an unmitigated irony and geek nature as an irreverent take on themselves, corporate culture and human social behaviour. From their early guest spots with Primus, Beck, The Buzzcocks, John Spencer Blues Explosion, Ministry, Pansy Division, TISM they quickly developed a following that led to signing with the Warner Records corporation. The first self-titled EP was released in late 94... quickly followed by the second EP New in early 1995. Late 1995 after constant touring Australia, they embarked on their first international trip with a European tour with Filter, followed by their first shows in Tokyo. After their debut Big Day Out tour in Jan 1996, they relocated to Bangkok to record their debut album with Magoo. April 1996 the first single Kong Foo Sing broke the cookie jar - an ode to the humble fortune cookie , it paved the way for the debut album Tu Plang (Thai for Jukebox) - a rubble of punk pop, hop-rock-beats & discarded sounds; and coincided with a national tour with the Red Hot Chili Peppers, followed by another with Japanese avant garde guests, Boredoms. The band was picked up by Reprise in the US along with their first US tour as guests of God Lives Underwater (as well as a Sub Pop 7” vinyl of I Sucked A Lot Of Cock To Get Where I Am). After a Japan/Australian tour together with CIV from New York (including an incredible show with the Boredoms in Osaka at Wo`Hol) and the Japanese release of Tu Plang, sold out Brisbane`s Festival Hall headlining Easy Cheese (with Powderfinger etc). After various Summer Festival appearances in Australia, along with shows The Prodigy (Sydney) & Rocket From The Crypt (Auckland), they open 1997 with another tour to USA and their only SXSW appearance, before embraking on an extensive tour with Helmet & The Melvins. Upon return, they set up their own studio The Dirty Room in a condemned warehouse in Brisbane`s Fortitude Valley backstreets to record the second album UNIT – it heralded a new direction with a strong pop ala 80`s electro vibe (although never short of their self-deprecating sense of humour and fun). UNIT was released in 1997 culminating in a national Australian tour with The Prodigy and their biggest single Polyester Girl. Unit ended up reaching triple platinum in Australia. This was followed by the Anti-Jabiluka Uranium mining protest for the Mirrar people - a 5.00am performance with Midnight Oil & Coloured Stone at the blockade of the proposed mining site in the Kakadu National Park. A third tour to Japan is followed by the sellout Australia/NZ Caveat Emptour with TISM, that incorporated the usage of a large scale visual projection of computer animation of the band members. More dates in Japan and the UK (including the Reading Festival and the UK release of UNIT), ARIAs for Unit, their second Big Day Out tour before relocating their studio bits & pieces to a Byron Bay beach house to make ...art – the third album. After tours with Japan`s Audio Active, and the Art Tour with Custard & The Resin Dogs, drummer Martin Lee depart to be replaced by Front End Loader drummer Peter Kostic. After more Australian festival shows and tours over 1999/2000, the SNOOZER presented Japan dates were their most successful so far, the album going on to sell 12,000 copies. Quan & Ben commenced work in their home studios on their fourth album Eduardo & Rodriguez Wage War on T-Wrecks, relocating to London to mix with Andy Gill (Gang of Four). A quick trip to Japan for the great Fuji Rock Festival as the album was released in Australia, NZ, Japan, Singapore, Germany and Scandanavia in July 2001 along with Australian Canon Fodder tour with guests Gerling through Aug/Sept 2001. After an appearance at Brisbane`s 2001 Livid Festival, they headed back to Japan again with special guests The Zoobombs, followed by a New Years Eve show at The Falls with The Hives etc and the 2002 Big Day Out tour in Jan/Feb (performing between System of a Down and Garbage on the mainstage). The highlight of this tour being the inclusion of Peaches and a duet on her track Rock Show.

In June 2002 they performed in London at the Fierce Festival to 20,000 people, along with Midnight Oil, Spiderbait etc. After ending the deal with Warner, the JINGLES single compilation was released in Oct 2002. A short Australian tour – Nein, Nein, Nein...the Slumber of the Beast also led to a DIY DVD release of live tunes from this tour as their first independent release through Valve. In 2003 while Quan was based in Switzerland, Sweden and London a UK tour and release of Jingles (independent label Kennel) took place. Following a second tour to the UK in early October, they performed at one of the first alternative music festivals in Hong Kong… the Rockit festival along with the 17 piece Spanish Harlem Orchestra from New York, Electric Ell Shock and Ride… This was when plans were hatched for the Band in a Bubble concept to take place in conjunction with the independently released fifth album MISHMASH! An idea suggested by their manager in 1999 and given some value when Quan witnessed david Blaine suspended above the Thames while on tour there…

After various festival appearance including a very torrid night at the Sydney festival with Peaches and Spod, and a headline spot on the St Kilda Festival in Melbourne, and the Bong in my Eye tour with Spod and The Grates … the Band in a Bubble was born in Melbourne’s Federation Square Aug’04. Regurgitator has a long history of trying hard to buck the system that feeds them but as of August 31, they gave themselves over to the system, exposing themselves to the machinations of the "culture industry" whilst still getting to wear the pants. In partnership with Channel [V], Regurgitator are sealing themselves in a transparent, "fishbowl" studio to record their new album and show the world (well a viewing segment of the world) how the creative process is ultimately both destructive and hypnotic, liberatory and constraining, beautiful and very ugly. By creating a panoptic platform for their public, they will give themselves over to their viewers/fans/citizens and allow the intrusive eye of the public to pierce their "bubble". After the BAND IN A BUBBLE and the release of the album they escaped to another Australian tour, a second ROCK IT appearance in Hong Kong, Homebake in Sydney (early Dec) and the 2005 Big Day Out tour. In Sept’05 they release their latest EP #*?! Featuring Pretty Girls Swear and set out on the Regurgitator Lives tour with friends New Zealand’s brilliant The Mint Chicks, and Snowman (from Perth). They performed at Earthcore in late 2005, where Quan & Ben were joined by Ben & Simon from The Bird, turning our drum & bass versions of their tracks. Feb’06 saw them perform at the Dusty Days Festival in Wagga Wagga and an awesome performance at the Domain for Tropfest2006. Mishmash! came out on Avex in Japan Apr’06. They headlined Come Together, Luna Park in Sydney in June 06 and followed this up with a periodic string of shows over the remainder of the year… Quan produced a fantastic animated video for The Game. A Brazilian release and tour is also still on the cards.

Band in a Bubble, in conjunction with Valve Records, was licensed to take place in London (now scheduled for mid 2008) and in New York (produced in the Meat packing District over May/June 2007). Ben also released a solo project under the name JUMP 2 LIGHT SPEED and Quan is currently based in Hong Kong working on solo projects including the recently released EP with Spod entitled BLOX. Regurgitator did an extremely fun tourin Feb/Mar 2007 over NSW, VIC and SA prior to Quan’s departure and before starting working on new tracks for their sixth album. The latest album Love and Paranoia recorded in Brazil sees Seja Vogel join on keyboards, featuring the singles Blood and Spunk and Romance of the Damned, is out now. Upon release they set out on a highly successful 28 date 7 week long tour of Australia in Oct/Nov with special guests New Pants from China and Brisbane latest sensations I Heart Hiroshima. From that point they launched into a string of festival appearances over the new year culminating in another great mainstage Big Day Out 2008 run all in white playing after Antiflag and before Arcade Fire. In April 2008 they returned to live fire and headlined the Essential festival along with shows with guests Ratatat. Plans were set afoot for dates and releases in the UK, China, Japan, Brazil, Vietnam, Singapore… and whatever else sticks to the wall. In July/August they had a rather special tour in Australia with DEVO! (plus Eddy Current Suppression Ring opening Sydney and Melbourne shows)... where at the final show in Perth Devo invited them on stage to perform Beautiful World with them. After this and various headline shows they headed off to the UK to play shows in Glasgow and London in support of the album release there on Valve/Weatherbox. This was followed by an extensive tour through Hong Kong (in a makeshift club put together on the 10th floor of a warehouse building with Macy Gray as guest), Laos (in this incredible old Russian Circus building in Vietianne presented by Tiger beer and raising money for prosthetic limb support group COPE… and where the power went out just as the band started to dodgy pyrotechnics installed by the promoters… hilarious moment), Vietnam (to 1500 people on the site of the US embassy with a great lineup of Vietnamese artists including Ngung Guc) and China (with 5 shows in Beijing, Shanghai and China’s capital of punk rock Wuhan… and where the album was released by Modern Sky). The sold-out Chinese shows was an amazing run playing with guests Hedgehog, New Pants and more. They also shot a video for Hurricane in the confines of the Hidden City with Peng Lei from New Pants which has just been completed. The final months of 2008 saw them return to Australia to play well received sets at Stonefest in Canberra, Fat As Butter Festival in Newcastle, the Meredith Festival in Victoria… before another trip to Vietnam to play the Loreto Festival in Ho Chi Minh City to raise money for education facilities for unprivileged, handicapped and blind children. Early in 2009, with both Quan (The Amateur) and Ben (Radio5) releasing solo albums, Regurgitator played one final Brisbane show as they formulate a new phase for late 2009 – a debut at the Brisbane Riverstage with Spiderbait, Pnau, The Herd and more as part of Hear & Now festival. Time for a breather…