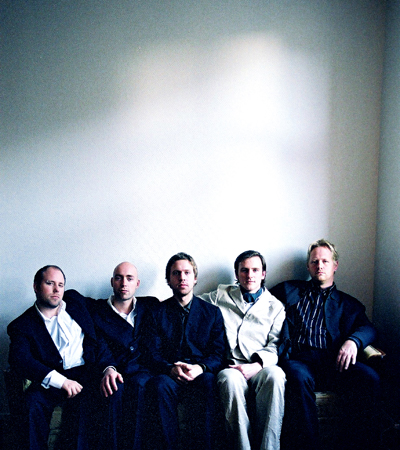 
"This music is vibrant, fast, and very modern. It is expressionistic, replete with saxophones that sigh, moan, honk, and howl. At the same time, it bursts with energy and swing. It's also utterly unpredictable."
-Marc Meyers, All About Jazz

Together with one of Norway’s most talented jazz drummers, Gard Nilssen, they give life to Per Zanussi’s compositions which sound like a cross between free jazz, fifties exotica, contemporary improv, funk, film music and afrobeat.

Zanussi Five release their two first records on the Swedish Moserobie Label run by sax player Jonas Kullhammar, receiving brilliant reviews. The records are distributed by Disk Union in Japan. In february/march two more are coming: One as a quintet and one as a 12-piece band with the Trondheim Jazz Orchestra.

Born in 1977, Per Zanussi grew up in Stavanger (the free jazz capital of Norway) with an Italian father and Norwegian mother. He started playing various instruments at five but picked up the bass at 13 playing in rock bands. After discovering jazz he quickly switched to double bass.

In 1996, while still a student in Trondheim he founded the electronic project Wibutee together with Håkon Kornstad and Wetle Holte.This outfit recorded 3 albums with Zanussi and toured most of the world in the following years.

In 2001 he founded his longest lasting project to date, Zanussi 5, playing Zanussi's compositions in an acoustic format. This group has recorded 2 albums and 2 more are on their way: One as a quintet and one as a version of Trondheim Jazz Orchestra, a twelve piece group.

Zanussi has a Masters degree in music from the Conservatory in Trondheim and the Norwegian Academy of Music, Oslo, concentrating on double bass and composition.His compositional work has so far resulted in music for prize winning theatre and dance performances and short films as well as the comission for Trondheim Jazz Orchestra and Zanussi 5 .

In addition to Zanussi Five he is a member of MZN3, Trespass Trio (with Martin Kuchen and Raymond Strid), Crimetime Orchestra and several other projects.

(alto sax,sopranino)
is classically trained and plays, in addition to being a soloist with chamber ensembles and orchestras, with Poing, Hero and his own solo project. Probably one of the world's top players of contemporary music on saxophone.

(baritone sax,soprano sax)
has led Trondheim Jazz Orchestra for the last years, performing with Joshua Redman amongst others . Hegdal also plays with Brat, Dingobats and Skomsork.

(drums and percussion)
has been one of Norway’s most talented drummers for the last years, performing with bands like Humvee, Bushman's Revenge et. al.

"...some of the most exciting Norwegian jazz..."
Roald Helgheim, Dagsavisen, Norway

"...one of the most original acoustic jazz bands at the moment..." (5/6 points)
Tor Hammerø, Nettavisen, Norway

a mixture of cultural influences turned into a soulful mix of sound....

Lo-Fi is a unique trio from Tokyo Japan that puts together a wide range of music styles together into a collage of funky vibes and rhyme. Bass/Vocalist and song writer 5(Goh) has spent most of his life constantly moving from on e place to another. This experience has helped in shaping the music created by the band. Although their foundation lies in soulful grooves, both live and recorded they change grooves freely, not restricted by any one genre on their sonic journey.