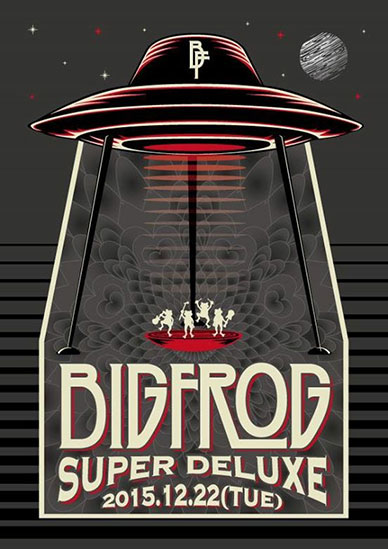 Live: BIG FROG DJ: Taichi & Tonioclutc SHOP: lack Cat Cooperative, DrILL, Nishida Shoten, maru and more... Sweets: nino (Yuko Ninomiya) Artist Information: Big Frog ![/sdlx/150124-bf.jpg](/sdlx/150124-bf.jpg) Big Frog formed in 1996 at the onset of the Tokyo jam band scene. Their unique sound blends the frenetic energy of Tokyo with a plethora of influences from British and American rock. 2000 was a landmark year for the band, as they opened for Phish at the Hibiya Amphitheater in Tokyo. From that point on, they made big waves in the jam scene in Japan as well as abroad. They’ve opened for the likes of Moe., Little Feat, Steve Kimock Band, David Nelson Band and played after parties for bands like String Cheese Incident and Keller Williams. They have played twice at the legendary Wetlands in NYC while touring in the states. 2003 found the band overseas again playing at the Melkweg in Amsterdam. In 2004, they had the honor to perform at the Jammys Award Ceremony in Madison Square Garden. Big Frog continued to impress audiences abroad in 2005, when they played in front of 10,000 people at Moe.down. They have a tight bond with Moe. that continues to this day. The band has played 3 memorable performances at Japan’s largest music festival, Fuji Rock. After years of extensive touring in Japan and generating a dedicated following throughout the country, the band broke up in 2007. While the hiatus was tough on the band and fans alike, the 7 year fermentation process has resulted in a rejuvenated and raging Big Frog! Join them as they rock the Bay Area this October! [BigFrog Offical Web Site](http://bigfrog.tokyo.jp)