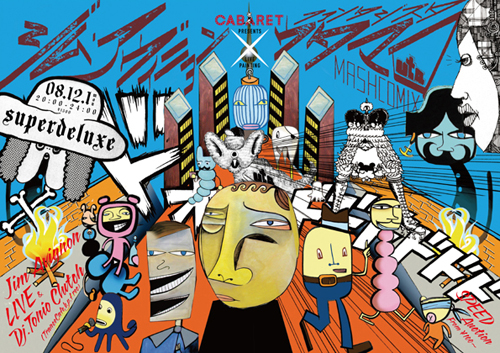 Profiles:
Jim Avignon a.k.a. Neoangin,
is a German pop-artist, illustrator and musician, currently living and working in Brooklyn, NY and Berlin.
Jim is famous for his speed illustrations and his extreme art performances.
His ideas on art are very clear: "I'd rather sell a thousand images for one dollar than one image for a thousand dollars."
For the re-opening of the Berlin Olympic Stadium in 2004 he created the "world's largest painting," which was 2800 sq.m in size, and for the Dokumenta Art Festival in Kassel in Germany he did a performance in which he painted one new picture every day, only to destroy it immediately.
He painted one section of the East Side Gallery in Berlin, on the site of the former Berlin Wall, and he has exhibited his works around the globe.
He has released several CDs with his one-man electro-band, Neoangin, and his live shows include both singing and life painting.
In 2008 Jim undertook a World Tour, during which he travelled to Sao Paulo, Brazil, to exhibit at Rojo Artspace. He also organised art festivals in Moscow and France and performed in New York, Luzern, Mulhouse and Berlin!
Towards the end of November he is finally coming to visit his Japanese fans in Tokyo, bringing with him an exquisite programme of life-painting shows and musical performances.

Fantasista Utamaro (mashcomix)
is a comic artist, illustrator, textile artist and animation director. He has worked for a wide range of clients, such as Nike, TOKION and
participated at the Pictoplasma NYC event in 2008 Utamaro is a member of the manga art group mashcomix. mashcomix (short for "mash up a wild mix of comic styles) became well known in Japan and overseas for their unique publications an projects in the comic, art, design and animation field, such as the interior of the Transit General Voice Restaurant "TOKYOBAR" in New York and the Blackhosts promotion video for Southern Fried Records in London. They created the entire exhbition for the launch Party of the Ikejiri Institute of Design Tokyo and did lifepainting gigs at Roppongi Hills Mado-Lounge Parties!

Tonio Clutch (TranceCafe,b.p.f rec)
Tonio Clutch Since 1998, Tonio has his career as a musician in his life, based in Japan and sometimes in Germany. As a resident DJ from Trance Cafe, he plays at metropolitan clubs from Hokkaido to Fukuoka, including major clubs like Citta or Ageha, and of course at nature world, where not only in Japan, but also in Germany, Austria, Switzerland, and Thailand. On the other hand, as a music producer under the name of CLUTCH, from 2004 to 2006 his own 17 tracks were released on various labels like b.p.f., Tree Hands,Maniac I.Q., Groove Zone, Stargate, Sub Machine, Plastik Park. His collaboration project with Vincent (Motion / Solead / Tetraktys) is progressing, too. At crossover point in 2006, he compiled the first album GEAR by his kinship on music scene, getting an interesting lineup like Chris Cargo, Lounge Control, Motion & Clutch, La Baaz, Trancefeld, or new faces like Cypher Drone(JP), Plasticin Porters (Fat Form Records). The Label is from b.p.f. records.