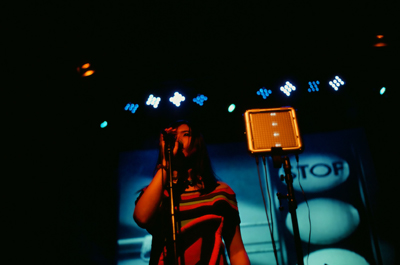 Named by TIME magazine as one of 5 Music Acts To Watch alongside Japanese multi-instrumentalist Cornelius is Singapore-based electro-rock chanteuse The Analog Girl. A pioneer in the regional scene who helped define the genre that is laptop rock, The Analog Girl first sprung into the international spotlight when American sportswear
giant Nike featured a track off her debut self-released, self-produced album The TV Is On on their European ad campaign Changing The Game in 2005. Since then her unique yet catchy brand of electro pop has been featured on NYLON TV for episodes featuring Kim Gordon (Sonic Youth) and Ladytron, landed her a support slot with New York's hypnotic electronic girl duo Telepathe and a series of live shows around the world. Armed with her sexy MacBook Pro and fascinating machines, The Analog Girl has taken her music from clubs to concert halls to art spaces, having headlined The Knitting Factory in New York, performed for top British photographer Nick Knight’s SHOWstudio in London, Worldtronics Festival at the Haus der Kulturen der Welt in Berlin, the
Cirque Electrique in Paris, gift_lab in Tokyo, Soso Cafe in Sapporo, Labella in Shanghai and at the MTV Asia Awards Voting Party in Singapore. Embarking soon on her next New York 2011 tour, The Analog Girl will be rocking a visual sound with her LED sequencer, the Tenori-On and other intriguing toys at Tokyo's premier sound art space Super Deluxe.
Photo by julius-landau
Homepage
SHIFT Review(JP)
myspace
Youtube