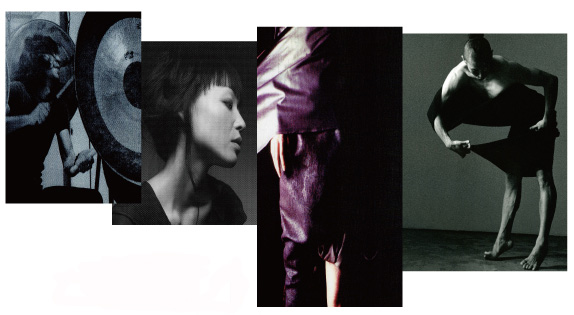 Tickets will be available online from: SuperDeluxe website, e+ (eplus) and also OTC in Family Mart and Seven Eleven.

NOTE: When door opens, we will admit those with e+ tickets first.

Kazuya Nagaya uses bronze bells, gongs and singing bowls which are mostly used in Buddhist or Hindu rituals in Tibet, Bari and Japan. He creates unique ambient music by mixing these sacred instruments with modern instruments such as keyboards and electric guitars. Before starting his solo carrier, Nagaya composed music for broadcasted commercials and won the finalist prize for "Best Use of Sound" from the "Hollywood Radio & Television Sociaty". Earlier, in his twenties, he started out pursuing his talents in literature and became a writer. His works, especially his story titled "Indio no mabushii kami" about Japan's ethnic minority, won enthusiastic praise within Japan's publishing circles. During this period, he also became deeply interested in literary works that were becoming lost in the shuffle of contemporary Japanese society: novels like the "Tales of Genji", as well as Buddhist folktales and Zen philosophical works. These interests breathed life into his music, and the sensibilities and philosophical views which he developed during his literary years have come to be reflected in large measure in the music he creates today. An example of this can be detected in the sounds of bells heard so frequently in his music. The giant bells found in Japanese temples are rung each New Year's eve. The sound is believed to purify and wash away the cares of this mortal world, and crowds flock to listen in reverent silence. What they listen for, however, is not the sound at the moment the bell is struck, but rather the fading sound that follows. As the sound fades away, simultaneously, the depth of their own silence grows even greater. In this way, the sound of the bell makes people aware of the profound silence -- and richness -- lying within themselves. It is silence of a depth fundamentally identical to that which is engendered through meditation or Zen. The temple bell, meditation and Zen are all ways of penetrating into the depths of one's self. Nagaya began his carrier as a solo musician with the 1999 release of his first album, "Utsuho". He has released an additional 6 solo albums since then, as of 2007. In 2002, he released a collaboration entitled "Resonator" with the American avant-garde composer Carl Stone. In 2004, Nagaya..s tracks were used extensively in "Gaia Symphony No. 4", a well-known documentary flim directed by Jin Tatsumura. In 2005, he composed the sound track for the Mexican film "WA". In 2007, Nagaya appeared in the movie "Gaia Symphony No. 6". Also in 2007, he published a book, "For All the Radiant Darknesses", a collection of his essays which is about his life, remarkable persons he has met, and reflections on his travels in troubled societies in the third world (developing world). In 2008, Nagaya joined with the compilation album "Tranchillizer" which was released by the chill out & trance label, Peak Records, in Switzerland. Nagaya is active as a performer of lve music in Japan, the US and the other countries. He has Collaborated with an eclectic range of artists, from musicians, dancers or painters to monks of esoteric Tibetan Buddhism, channelers, and a Native American story teller in Alaska.
Homepage / myspace

Voice Performer●●●●●working with and thru her voice and body, her work includes-- aside from being a musician and a performer-- photography, dance, writings (under the name of cleo k.) and a voice teacher. currentntly she's been performing with various musicians and dancers. please refer to the "schedule" page for the latest info. and to myspace pages for keiko's sound and the band 0.03, which she in part of. her previous activities includes...
Homepage / myspace

Dancer / Choreographer
Born in Osaka, JAPAN in 1977.
Studied dance, mainly street, Jazz, Ballet, and contemporary
Joined Jo Kanamori's [Noism], the first public contemporary dance company in Japan in 2004-05 and Tsujimoto was selected from over 200 candidates to dance with the company. Performed at the world premiere of Roland Petit's “Pink Floyd Ballet”in 2004. In 2007, Tsujimoto joined CIRQUE DU SOLEIL Tour in Italy as an only Japanese dancer. In 2008, he participated in JUSTE DEBOUT, world’s biggest Street Dance Festival in Paris, reaching the final round as a first Japanese finalist in “EXPRIMENTAL”style. Tsujimoto has danced and collaborated with many leading artists, such as Yukichi Hattori, a former soloist with Hamburg Ballet currently with Alberta Ballet, Sakiko Oshima, the director/choreographer of “H. Art Chaos” and Papaiya Suzuki, the dance celebrity. His first choreography for musical, TOHO MUSICAL’s “RENT” in 2008 was highly acclaimed and in 2009 he presented “3D”, which he co-directed with Yukichi Hattori. “3D” is a collaborative work featuring dancers from three different genres (ballet, break dance and contemporary dance) and a jazz pianist. Tsujimoto's work embraces a wide range of activities, from performing as a dancer, choreographing and directing performances to presenting workshops all over the world, including in Israel, US, Germany, Spain and more.
Homepage

Born in Tokyo. Studied graphic design at Musashino Art University in Tokyo and fashion design at Trent Polytechnic in England. Worked as a freelance designer in Europe. Started taking photographic portraits as she journeyed throughout Asia, Africa, South America and the Middle East, focusing on "human existence" ---- an unique perspective involving fashion and the body.
Homepage