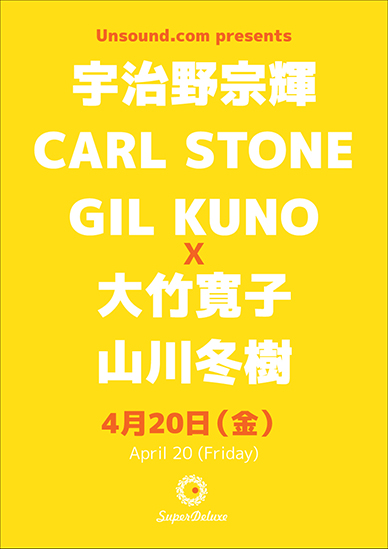 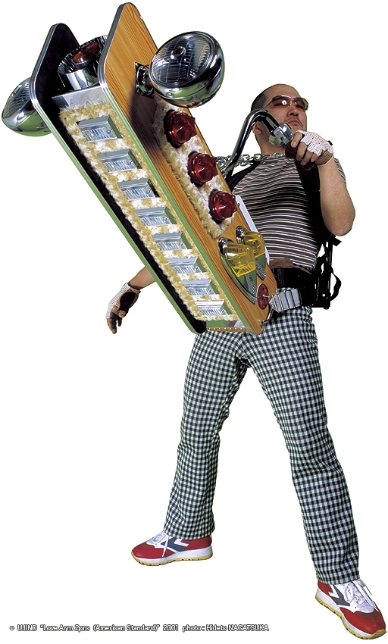 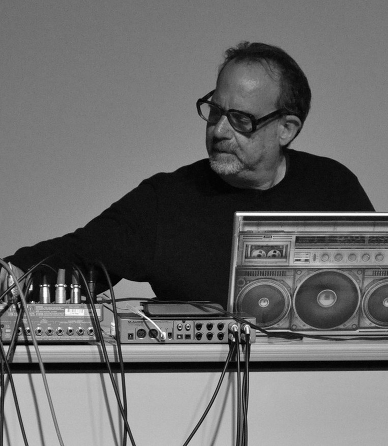 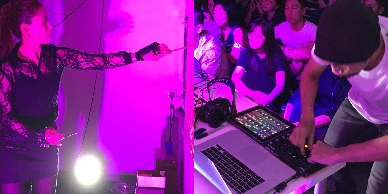 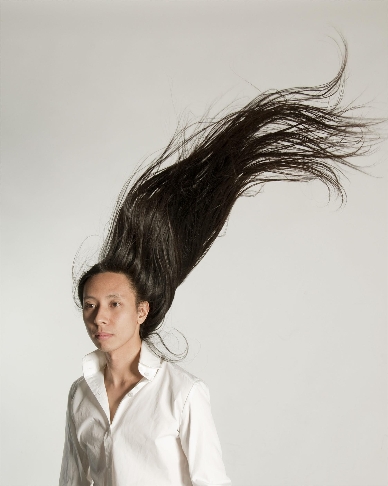 UJINO was born in 1964 in Tokyo. Since the 1990s, UJINO created a number of sound sculptures including LOVE ARM series and made live performances. In 2004 the artist initiated his best known The Rotators, a project of sound/sculpture/performance installations made of omnipresent products like electric home appliances, automobiles, furniture, old records and decorative lights combined and transformed to function like an automatic rhythm playing system. This project has lead to a number of exhibition and performance opportunities inside and outside Japan.Participated in Yokohama Triennale 2017.
UJINO official site

Carl Stone is one of the pioneers of live computer music, and has been hailed by the Village Voice as “the king of sampling.” and “one of the best composers living in (the USA) today.” He has used computers in live performance since 1986. Stone was born in Los Angeles and now divides his time between Los Angeles and Japan. He studied composition at the California Institute of the Arts with Morton Subotnick and James Tenney and has composed electro-acoustic music almost exclusively since 1972. His works have been performed in the U.S., Canada, Europe, Asia, Australia, South America and the Near East. In addition to his schedule of performance, composition and touring, he is on the faculty of the Department of Media Engineering at Chukyo University in Japan. A winner of numerous awards for his compositions, including the Freeman Award for the work Hop Ken, Carl Stone is also the recipient of grants from the National Endowment for the Arts, the Rockefeller Foundation and the Foundation for Performance Arts. In 1984 he was commissioned to compose a new work premiered as part of the Olympic Arts Festival in Los Angeles. His music was selected by the dancer/choreographer Bill T. Jones for the production 1-2-3. in that same year. In 1989 he resided for 6 months in Japan under a grant from the Asian Cultural Council and in that same year, The Museum of Contemporary Art, Los Angeles commissioned a new work, Thonburi as part of the radio series “Territory of Art”. In 1990 he was commissioned to create music for a 60-minute program for ZDF Television in West Germany entitled Made in Hollywood. In 1991 he received separate commissions from Michiko Akao (She Gol Jib, for traditional Japanese flute and electronics), Sumire Yoshihara (for percussionist and electronics) and Sony PCL (Recurring Cosmos, for High Definition video and electronics), which was awarded special honors at the International Electric Cinema Festival in Switzerland in 1991. In 1993, he was commissioned by the Paul Dresher Ensemble to create a new work, Ruen Pair, with funds from the Meet the Composer/Reader’s Digest Commissioning Program. In 1994 he was commissioned by the Strings Plus Festival, Kobe to create Mae Ploy, for string quartet and electronics. In that same year he also created Banh Mi So, for ondes martenot and piano, at the request of Takashi Harada and Aki Takahashi. In 1995, he was commissioned by NTT/Japan to create a new work for the internet , Yam Vun Sen, as part of IC95. In 1996, with support from the Rockefeller Foundation, he created music for The Noh Project, a collaboration with choreographer June Watanabe and Noh master Anshin Uchida. In 1997 he was commissioned by Bay Area Pianists and Cal Performances to create a new work, Sa Rit Gol, for disklavier and pianist, as part of the Henry Cowell Centennial Celebration at UC Berkeley. Other festival performances in 1997 included Other Minds (San Francisco) and TonArt (Bern). In 1999 he was invited as Scholar-in-Residence at the Rockefeller Foundation Bellagio Study and Conference Center. In 2001 he served as Artist-in-Residence at the International Academy of Media Arts and Sciences (IAMAS) in Japan, and in that same year he joined the faculty of Chukyo University’s School of Cognitive and Computer Sciences.In 20011 he was named an Artist Fellow by the Civitella Ranieri Foundation in Italy. Recordings of Carl Stone’s music has been released on New Albion, CBS Sony, Toshiba-EMI, EAM Discs, Wizard Records, Trigram, t:me recordings, New Tone/Robi Droli, Unseen World and various other labels. Carl Stone’s music has been used by numerous theater directors and choreographers including Hiroshi Koike, Akira Kasai, Bill T. Jones, Setsuko Yamada, Ping Chong, June Watanabe, Kuniko Kisanuki, Rudy Perez, Hae Kyung Lee, and Blondell Cummings. Musical collaborations include those with Akaihirume, Michiko Akao, Pearl Alexander, Samm Bennett, Sarah Cahill, Gianni Gebbia, Mineko Grimmer, Haco, Alfred Harth, Madoka Kono, Gil Kuno, Min Xiao-Fen, Otomo Yoshihide, Kazue Sawai, Elliot Sharp, Yasuaki Shimizu, Stelarc, Aki Takahashi, Yuji Takahashi, Tosha Meisho, Kazuhisa Uchihashi, Wu Na, Wu Wei, Michiyo Yagi, Miki Yui and z’ev. Carl Stone served as President of the American Music Center from 1992-95. He was the Director of Meet the Composer/California from 1981-1997, and Music Director of KPFK-fm in Los Angeles from 1978-1981. He often hosts a weekly program on KPFA-fm in the Bay Area USA. Other activities have included serving as a regular columnist for Sound & Recording Magazine in Japan, serving as web editor for Other Minds, a world wide web site devoted to New Music, and for the official web site of the John Cage Trust.
Carl Stone official site

Gil Kuno
Through careful social conditioning, the mind is guided to think within certain patterns. Gil tries to redirect the flow of the mind outside of the set patterns we are taught by society to construct. In his work, he attempts to displace natural activity from its context, revealing an otherwise hidden level of metaphorical absurdity within the ordinary patterns present before our eyes. The goal of sublimating everyday perception underlies many of the projects he has exhibited or performed. He aims to push people away from paradigmatic thinking through various themes and methodologies – aleatoric systems (chance operations,) exaggerated perception, derailed reality and re-envisioning experiences common within everyday life. He has collaborated with artists such as Eye Yamantaka (Boredoms,) Yoshimi (Boredoms, OOIOO,) Battles, Vincent Gallo, Ken Ishii, Tatsuya Yoshida (Ruins,) Carl Stone, Alec Empire (Atari Teenage Riot,) Steve Albini (Big Black, Shellac,) Cristian Vogel, Zbigniew Karkowski, Merzbow, GX Jupitter Larsen (The Haters,) Nissennenmondai, Christian Galarreta, Joseph Hammer, Patric Catani (EC8TOR). Gil received his MFA at UCLA. He has achieved recognition from Ars Electronica, Japan Media Arts Festival, Canon Digital Creators Contest, Timothy Leary (Leary.com), among others.
unsound.com

Hiroko Otake
The main themes of my paintings are butterflies and flowers. They are coupled together into never ending instants, veiled in uncertainty, where every minute of existence is constantly renewed. I can feel sincerity and candor while observing the nature and the butterflies. Butterfly here means “Psyche” (from the Greek “ψυχή “ (psūkē) was “life” in the sense of “breath”, “spirit”, “soul”. And ultimately “ego” in the sense of “conscious personality”) I thus paint butterflies in my works representing these symbols: soul, mind, “Numen”(the power of God) , but also beauty, shimmer, and spiritual renaissance. I started painting butterflies as I felt that similar to them I was able to modify and renew shape, with the unrestricted chances deriving from the ephemeral and transient nature of the change. While painting butterflies and focusing my mind on the literature concerning such theme I have discovered their many symbolic meanings. Through my work I want to express my impressions and feelings combined with the symbolism of butterflies.
Hiroko Otake official site

Born in London UK on 1973. Based in Tokyo Japan. Fuyuki Yamakawa -creator of sound/visual installations and improvised musical happenings – picks up and amplifies the sound of his heartbeat with an electronic stethoscope. At the same time this triggers the lighting of a series of light bulbs that oscillate simultaneously with the heartbeats, themselves cadenced to the rhythm of his ‘Khoomei’, a form of popular Tuvan (central asian) overtone singing in which Yamakawa excels, characterised by diplophonia, which is the contemporary emission of two sounds requiring total control of one’s breathing. Through his vocalisation, he controls his heartbeat’s speed and velocity. ” My physical body`s phenomena is outputted as sound and light and it gives perceptional stimulations to eyes, ears, and skins of audiences. Eventually the venue transforms into extended part of my body,” he says. ” Sometimes it stops my heart for seconds. I use electric guitar but I never touch the strings. I shake and rub the body of guitar to make drones. These actions work like ‘sports’, which influence heart beat.” With a background in video art and graphic design, in 2001 he won the Grand Prix and Audience Award at the 1st Khoomei Festival in Japan (September) and started his professional career as a voice performer. In 2003, he was invited to the 4th International Khoomei Festival, which was held in the Republic of Tuva. He won the Avant-garde Award in the contest and became known as an Avant-garde Khoomei singer. In the same year, he participated in the 2nd Khoomei festival in Japan and succeeded in defending his championship title.
Fuyuki Yamakawa official site