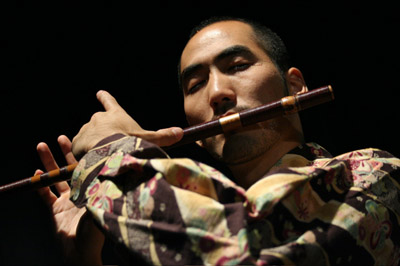 Following on the heels of its wildly successful 2001-2002 U.S. tour, Tamango's Urban Tap presents its current evolution, Full Cycle, a show whose sold-out two-week premiere run at New York's Joyce Theater proved the group's widen visual music. "Within this mix, Tamango creates magical and timeless happenings inspired by the rhythmic cadences of the street's global sounds. Driven by an urban beat immediacy and fueled by improvisation, Full Cycle features a dynamic global cast of performers in an innovative exchange of rhythms spontaneously improvised in each show by Tamango. Full Cycle takes you on a soulful journey, articulately crafted through the rhythmic versatility of dance and music.
"Urban Tap finds comrades in any deep rhythmical recitation. You can almost see the diorama of the world speed behind the band." -The Village Voice
The work merges a broad range of free-style dance, including tap, capoeira, African and hip-hop, with a video montage born "live" during each show and the exhilarating sounds of Haitian drumming, world percussion, didjeridoo, cello, trumpet, vocals and more. The Full Cycle ensemble includes some of the most dynamic performers from the underground scene from around the world in a powerful intermingling of cultures and creative styles.
At the helm of this exciting arrangement is Tamango, a revolutionary tap artist who has been described as "one of the great tap artists performing today, a dancer of astonishing speed and lightness whose feet produce a rippling, richly complex cannonade of tap beats. He never ceases to suprise - don't miss him!" -The New York Times

Sakamoto Hiromiti (b. 1962, Hiroshima, Japan) is a cellist who plays not only the cello, but also performs using voices, musical saws, among other things. In order to pursue and broaden the possibilities of the cello, he dares to use various effects, bumping and thumping, scrubbing, and goes so far as to use an electric drill or a grinder, producing sparks. His radical yet lyrical performance are indeed an experience. Besides performing solo improvisations, he collaborates with many other musician as well as people from other genres of art, such as movie, theater, the fine art, photography, butoh, and street performance. His activities are eclectic, crossing over other boundaries. 1999, his solo works CD "zero-shiki" has been released. The musicians he played together at the past ,Umezu Kazutoki, Otomo Yoshihide,Uchihashi Kazuhisa, Yokogawa Tadahiko, Haco, Samm Bennett, "CICALA-MVTA", Lars Hollmer(from Sweden), "32 JANVIE"(from Lyon), PUSSE(from Paris), and many others.

myspace
Mio Matsuda began her singing career when she discovered fado, the magical traditional music of Portugal. Living in Lisbon and learning the culture, she developed fado as a form of her own self-expression. While studying fado in traditional Casa de fado (fado houses) in Lisbon, she became familiar with the music from the diasporas of Portuguese influenced countries. In 2004, she traveled to Minas Gerais, Brazil, representing Portugal, to sing in the event called "Na Ponta da Língua," as a representative vocalist. In the same year, she was invited to sing for a month in the Cape Verde islands where she discovered the beauty of Creole music. Her trans-Atlantic musical experience led her to record her first album "Atlântica" (2005 JVC) in Rio de Janeiro. "Atlantica" united songs from the many Atlantic Ocean ports of Portugal, Cape Verde and Brazil, mixing the lovely sounds of these three highly musical countries. In the following year, Mio recorded her second album “Pitanga!”(2006 JVC) in Rio de Janeiro. On "Pitanga," she recorded her own compositions inspired by the northeast Brazilian rhythms and rituals. Her voice mixed with the many instruments and musical styles of that highly musical area. While becoming an important figure in interpreting the music of Portuguese culture in Japan, Mio has collaborated with artists from all over the world, such as the already legendary Yamandú Costa (Brazil) and the inspired Jadranka Stojakovic (Sarajevo). Mio's unique singing style and sensibility reflects her colorful background and inspiring journeys. Recently, she maintains a home base in Brazil and in Japan, working with the guitarist João Lyra, with whom she plans to tour all over Japan in the fall of 2007.

Born 1971 in Philadelphia, Daniel Harris Rosen first went to Japan in 1990 when he fell in love with clay and traditional Japanese pottery. Daniel would go on to spend most of the 90s in Japan doing writing and production work, but he always reserved the weekends for time behind the potter's wheel.
In 2000, he returned to the United States to formally study ceramic arts and spent over three years in the University of Hawaii at Manoa art department honing his craft. During that time, Daniel's work was exhibited at both state and national exhibitions in the United States, and he gained a local following on the island of Oahu where he lived.
In 2004 Daniel moved to Tokyo where he took a break from vessels and began doing large-scale installation work. In March of 2007 he graduated with a Master of Fine Arts from Tama Art University and was accepted into their doctorate program immediately after. His present research and studio work focus on reexamining the boundaries of ceramic arts in a 21st-century context.

Born in 1970 in Tochigi Prefecture, Japan, a rural area two hours north of Tokyo, Kakinuma began studying traditional Japanese monochrome brushwork at the age of five. Kakinuma’s own father, Suiryu, a renowned artist in his own right, was his first teacher and also introduced him to one of the greatest artistic influences of his life: Yukei Teshima. The flamboyant Teshima, who received international acclaim for his bold, powerful work among artists such as Picasso and Matisse, took the young Kakinuma under his wing, calling him the most promising student he had ever seen. After Teshima’s death, Kakinuma continued study under one of Teshima’s disciples and a giant in his own right in the Japanese monochromatic art world, Ichizyo Uematsu. In 1989, Kakinuma entered the prestigious Tokyo University of Arts and Letters as a student in the Department of Visual and Performing Arts. It was soon afterward, in 1990, that he arrived on the national stage when he became the youngest person ever to win the coveted Dokuritsu Shojindan Foundation prize for his interpretation of a classical work by the late-Edo period artist Suo Nukina.Kakinuma’s rise through the Japanese art world has been meteoric, winning one prestigious competition after another, having his life and paintings featured in several televised documentaries, and being invited to demonstrate and show his work at the Metropolitan Museum of Art in New York.
Kakinuma has constantly sought to break free from the strictures of his classical training and to express himself in innovative, experimental ways. His affinity for massively large monumental works reflects his belief that these large pieces, whose sheer size overwhelm the intellectual capacity of the artist, force him to paint in accordance with what he calls the Eternal Now. The Eternal Now represents a one-shot, winner-take-all sensibility that permits no uncertainty and no hesitation, and allows no regrets and no revision. It is the quintessential expression of Japanese art – bringing together the years of tedious, repetitive study of technique and theory with the dynamism of the psycho-spiritual energy manifesting itself at a specific instant in time. Another of his trademark innovations is that of Trancework, where he paints countless repetitions of a simple, powerful phrase as he falls deeper and deeper into a trance.
Invited to be a visiting researcher at Princeton University, Kakinuma resided for the 2006-2007 academic year in Princeton, New Jersey. His most recent work, The Warrior Ideal was selected as the title artwork for the 2007 season of Japan’s most popular long-running television show, The Taiga Drama Series.
Teachers: Mr. Yukei Teshima / Mr. Ichijo Uematsu
Current Status: Judge - “Dokuritsu”Shojin-dan Foundation
Member of“Mainichi”Shodo-kai